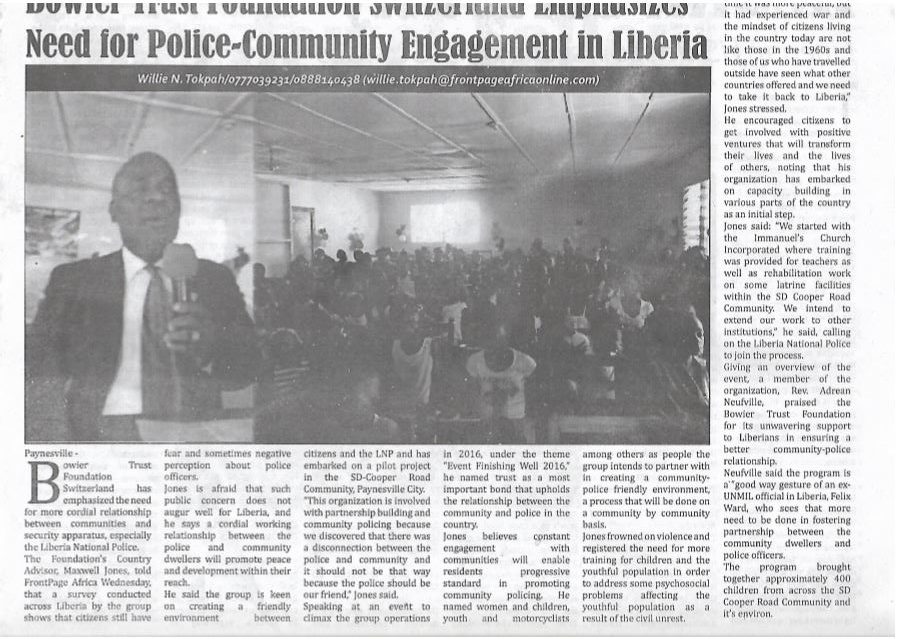 The current target area of the foundation work of BTFS is located about 45 minutes southeast of the center of the capital Monrovia in Paynesville and is called SD Cooper Road Communities. It comprises 4 so-called blocks – named after 4 municipalities. SD Cooper Road Community, Chapel Town, Divine Community and Gbagbo Town. Families of all 4 “blocks send more than 300 children to Immanuel Christian Academy (ICA), SD Cooper Road, where they are taught from primary to junior high. The school principal is headmaster, pastor Paul Mitchell, who can count on the help of about 20 teachers. About 60% of them have a teacher’s certification. They receive many a times, but not consistently, little salaries ranging between 40 to 60 US $ per month. Approximately 70% of families can pay a small school fee or tuition. The property belongs to Immanuel Church, located in the same place, under the direction of Reverend Pastor Adrean Neufville. The church supports as much as possible the maintenance of the school enterprise. The infrastructure of the school is in unsatisfying condition. Before the last rainy season in April 2016, the rooves were completely repaired thanks to donations from Switzerland, so that virtually no leakage was experienced in the 13 classrooms during the heavy rainfalls between April and October. The children received Liberian rice and water bags 1-2 x per day from women who do this voluntarily and receive a few Liberian dollars per week (about 90 LBD = 1 US$). There is no electricity and the hygienic conditions are simply miserable. There is a single water pipe with a water tap, which can be used inconsistently and unreliable as a water dispenser. Not far, there is a well, a draw-fountain, where water is brought by buckets. An acceptable “squatting-toilet” solution would already be seen as progress. It stinks and there is no suitable sewage and waste disposal. Children are neither used to washing their hands properly, nor are they protected from diseases such as malaria, typhus, diarrhea and HIV. Teenage pregnancies are a big issue because sexual assaults and violence is one of the most pressing problems. The blocks “Kpelle” and “Gbagbo Town” are particularly problematic and considered as negative incident breeding zone.

Fruitful contacts to Immanuel Church and its School were established in 2016 by local members of the “Bowier Trust Foundation Switzerland” – initiated by its founder, Felix Walz. His plans for the way forward, has been actively supported by representatives from the Ministry of Foreign Affairs and the Liberia National Police. The first ad-hoc team – later augmented by appointed Team Leader Gladys Flomo, youth representative Sam Holt jr, women representative Myrtle Bowier and chief administration, Michael Smith, took care of the concerns and needs of these 4 blocks around SD Cooper Road. First meetings with representatives of the various women and youth organizations led to a dedicated training in the Immanuel Church, where they were trained how to jointly identify and structure problem areas. This basic training in project management met with great interest, but it had to be recognized that it takes a lot of patience and time until the methodology of contemporary project management can really be understood and applied.

On June 29, 2016, a first large-scale campaign with public interest took place in the nearby “Right to play Complex”. Well over 200 young people in particular took part. Among them was a large number of girls, women, policemen, teachers, religious representatives and about 70 members of the so-called “Motorcyclists” – some of them with a criminal reputation. Some of their leaders later said that this was the first time that they had come together peacefully with the police in one place. The event was attended by high-ranking representatives of the Liberia National Police as well as representatives of the ministries. The main focus was on calls for peaceful coexistence and violence – especially sexual violence against girls and women – and finding ways to help the children achieve a better future. The local press and UNMIL Radio reported on this campaign.

By the end of 2016, further organizational and executive meetings followed with representatives of the 4 blocks. The aim was to consolidate the existing orientation on effective community partnership building and to confirm the Immanuel school as an “epic center” and to create a model, a show-case, together to motivate the population that only a peaceful and joint approach to problem solving can be financially supported. On the basis of this increasingly widespread acceptance, and because a trustful team began to crystallize, it was decided at the end of 2016 to organize an occasion with the local population – for once without problems, but to make the annual conclusion worthy and positive and to prepare a delightful transit to the new Year 2017. Positive and constructive in a direction to go together in the future and not return back. We called the event “Finishing Well 2016”. More than 400 people – especially children – participated in the event on 28 December 2016 and became a wonderful festive event for a few hours. The political advisor of our foundation, Mr. Maxwell Jones, formerly Assistant to the Liberian Foreign Minister, demanded and motivated people to actively participate in the school model and to work together with the Liberia National Police to stabilize peace effectively so that today ‘s children’ s perspectives for a secure future, as well as access to education becomes reality.

All involved people are confident to achieve further positive milestones collaboratively. These are to be prioritized, structured and implemented with guidance and support of the Swiss Foundation in a planned workshop for 2017.