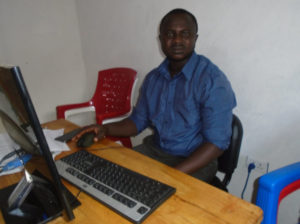 Elijah time spent at BTFS since his entry into the NGO cannot be measure by the work he had done, as the lad is one of those who had been instrumental among his colleagues in the Field Team to bring about those positive changes that BTFS hope to achieve. Born in Lofa County, North-Western Liberia and hails from the Gbandi ethnic group, Dunoh good personal human relation is reflected in his community and at his office at BTFS and considered as a “Cement between the holes.” He enjoys being a staff at BTFS because of his zest to work for humanity and always feel that giving to the need is most important and a core value to his life.

“I am Elijah B. Donoh, born in Lofa County and grew up in Montserrado County and I am married with a kid. I am a senior student at the University of Liberia studying General Forestry.” Happenstance with BTFS “Elijah came in contact with Bowier Trust Foundation Switzerland through the recommendation of my friend Hamnson Gaye who is now serving as the administrator for BTFS. He encouraged me to serve as volunteer and that was how I became a staff of BTFS. BTFS is helpful to the Liberian Society, more especially when it comes to some of their projects and we are about to launch one of the one of the major projects since BTFS was founded and I believe this project will be successful. BTFS engagement in the Liberia society has brought proud to most especially the staff.” BTFS Addressing Pitfall and Challenges Donor believes BTFS is instrumental in alleviating pitfall and challenges faced by community dwellers, police, motorcyclist and sometimes government. “Well there are lots of challenges when it comes to the program which BTFS is trying to address, most especially water and sanitation. Most of our communities do not have safe drinking water so our work is a great help to the community. His Contribution to BTFS As one of the engines in the youth section, he feels his contribution to humanity is quite important and would help to shit the destiny of some people somewhere. “As one of the engines in the Youth Section assisting the youth representative and women representative to help launch and write programs, I feel good because there are lots of program I have written and I can’t name all. Presently, I am heading the Watch Club in our targeted schools along the SD Cooper Road and this has made lots of impact.  We have conducted seminars for three schools we are working with and this has created an impact on the livelihood of students forming part of the club. I know that this is just the beginning and we need to expand not just in Montserrado but to other children and communities outside Montserrado to benefit from immunity BTFS is offering to thye country. Contented with Honor I am proud of this honor as Staff of the Month because we are many in this place, and believe that it is a favour but based on my performance at this place in a very short period of time. It’s based on my commitment and hard work and good working relationship with my bosses. I am proud because I enter BTFS as a volunteer and this month is my 10 month serving BTFS and I am happy to be selected. I am very grateful to God. This honor serves as a motivation for me do more and as staff of the month, I can promise you that I will win this award more than three times. That’s a great competition and before December I must take the staff of the month honor once again. There are lots of plan we have on mind and we are waiting for the right time, especially when things are done in the right way, BTFS will be pushed to the highest height in Liberia. Called on BTFS Senior Management Team He lauded Felix Walz and his corps of official for taking on their time to contribute to humanity in Liberia. “Just to encourage him to continue his hard work and the donors outside Liberia, the family of Switzerland which is supporting our institution in implementing most of our jobs and what we are going through. We want to encourage him and that God grant him strength and long life so that he continue to get the courage and trust in staffs of BTFS and pray that BTFS reach to the status of United Nations which is worldwide. Finally I am grateful to be selected by BTFS as Staff of the month of April and see this as a competition and say thanks to the administrator Hamnson Gaye for his courage and support in making me to perform more. Thanks also to my team members in the youth section for their supports. 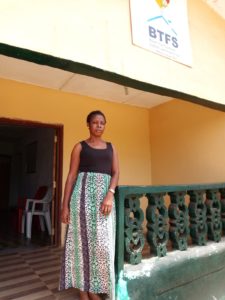 Estella Kangar is a humble and dedicated young Lady whose willingness to perform multi-task at her work site has placed her on the spotlight as the organization outstanding staff for the Month of February. Estella, a mother of one kid, is a caterer and has skill training in Hotel and Restaurant Management and current reside in Monrovia. She spoke about her life story and her encounter with BTFS: “I was born unto the Giplay’s my real parents in the year 1979 in Liberia’s Capital, Monrovia but was adopted by the Kangar’s Family few years later and taken to Newport Street, Monrovia. I begin my elementary education at the Caldwell Mission in ELWA Community and later move to the Newport High School in Monrovia. I was one of those students who were eager to learn but my dream for quality education could not be achieved due to lack of support that held me back over the years, thus making me a high school dropout today. Life seems difficult but I was not discourage, saying to myself,  I can make way by other means, so I decided to engaged into learning Catering and Hotel Management as a mean of sustaining myself because I do not want to just sit by and allow myself to be overlook. I have been going through some challenges but I manage to overcome those challenges, saying to myself I will keep pushing forward. This catering skill which I now used as a means of survival was learnt through practical training and several groups, including international people feel pleased to hire me for catering.” Encounter with BTFS Estella expressed happiness in working with BTFS, saying it creates a new experience for her livelihood and assures her hope. “I came in contact with BTFS in May, 2017 as caretaker but I was self-motivated to join the field team in 2018, January through the encouragement from Mr. Walz, BTFS President and Administrator Hamnson Gaye. Well working with this NGO is like meeting a new family and it makes me feel more motivated in during my job and extra work at BTFS. You know, working with people who understand each other and learning new things while during a work is great. Being with BTFS has brought a lot of changes to my life and encouraged me to be self-empower as well as helping to educate others in my community on important things. BTFS Empowerment and projects means a whole lot for Liberia, especially the water and sanitation project and girls empowerment. The girls empowerment workshop BTFS has been conducting in Liberia is very good because it would help to enable young girls empower themselves and to have self-esteem. Working with schools and community, police and motorcyclists is another thing I really love about the organization, also their move and engagement with some community leaders to see that safe drinking water and good sanitation go the neighborhood is great. Madam Kangar wants BTFS do more “I would like to see BTFS moving into the hinterland and not only to remain in one quarter, because what they are now doing in Paynesville is good. There are many people out there in some other areas, especially the hinterland, who are not educated on good sanitation and the need to have safe drinking water, because most of them used the bushes and drink from creeks. Another thing is police and motorcyclist relationship, which is not only a problem in the capita, but the interior, there is a need that BTFS carries its education there. I want to thank BTFS for selecting me as their staff of the month, which I see as a sign of encourage and want other staffs who may be selected in the coming months to join me in see this as an opportunity to work more and create new ideas that will keep the NGO running,” Estella Kangar ended.