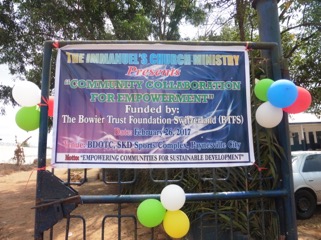 Paynesville – Reflecting on the topic ‘Teenage Pregnancy and Sexually Transmitted Disease (STD)’, registered mid-wife Oretha Slocum thrilled her audience when she outlined factors responsible for teenage pregnancy in the country.

She spoke on Sunday February 26, 2017 at a one day seminar organized by the Switzerland based NGO, Browier Trust Foundation, at the Immanuel Church School in the SKD Community.

The first major factor she listed as being responsible for teenage pregnancy is lack of job for the parents.

Madam Slocum also revealed that broken homes also play another important role as it leaves many children with no parental care.

She called on teenagers to take advantage of sex education. According to Slocum, the effect of teenage pregnancy could be medical complication because the body of a teenager is not ready for pregnancy.

“Girls you should learn to stop asking boys for gifts and stop going around those different guys because your action will encourage them to come around you,” said Madam Slocum.

Hawa Morris, 15, told FrontPage Africa shortly after Madam Slocum’s presentation that she took interest in the pieces of advice offered by the nurse.

“As you are aware, most of the teenage girls love material things and go out to sell themselves but as a student wanting a brighter future, I will take the mid-wife advice seriously,” said Morris.

Prior to Madam Slocum’s presentation, many speakers spoke on different topics to include waste management, PTA involvement in student education and community policing.

Felix Walz, a Swiss national and retired Police captain who served in UNMIL and now the President of Bowier Trust Foundation stated that after his retirement from UNMIL, he returned to his homeland and formed the foundation named in honor of a class room teacher, Myrtle Bowier, because of her dedicated service to the teaching profession.

He stated that while working in the country as security personnel, he realized that there was a gap between the police and the community   and therefore form the foundation in order to work with the community through various programs.

Walz said the foundation was duly registered in January 2017 and since then; it has targeted 12 communities to carry out its programs.

“Liberia’s challenges are big. The country has a potential. What it needs is to have someone to help it move forward, especially institutional capacity building,” said Walz.