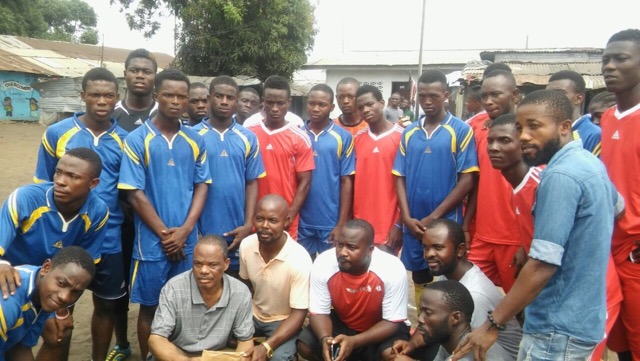 On 11 and 12 February 2017, a football tournament was organized by the local youth organization “Progressive Youth for Change

” with the help of our BTFS Liberia team, Sam Holt jun. (our initiative youth representative). The occasion took place in memory of the dead or killed young people of the Saye-Town Community. According to the local tradition, a leap year such as 2017 serves to commemorate all deceased youths of the municipality. It is about the cohesion of young people. For this reason, a football match with a total of 8 teams from around Saye-Town Community was organized. On the first day the qualifying matches took place. The final game of the two best teams on the following day, Sunday, February 12, 2017, was supported by about 300 spectators with great enthusiasm and the players were cheered. Private sponsors and the Bowier Trust Foundation Switzerland donated a total of around US $ 450. This allowed 20 bags with each 30 small “water bags”, 4 packs of “bottled water” for invited guests, as well as a number of “soft drinks“. Two policemen from the Liberia National Police, who live in the town of Saye-town, voluntarily provided with their presence law and order in their free time. The football event went without any problems and was a joyous and successful festival to enter this year’s “leap year” history of the Saye-Town Community. In particular, 5 dead teenagers who died last year were thought of. 3 were found dead as victims of presumptive accidents or violent killings and two died of malaria and typhoid. Our active “Youth Representative” and enthusiastic football fan, a certified electrician and IT-Crack – Sam Holt, served as “Secretariat” and co-organizer of the football festival. We thank him for his continued commitment as a young Liberian, who does not want anything more than the children and young people have a chance in life to make the beautiful Republic of Liberia safe and sound.

“We want to encourage young people to participate in the community in order to strengthen the community spirit through collective togetherness…” (Interview with Sam G. Holt, BTFS Member of the Liberia Management Team)