Have a look here: Hess Praktiko 4

In cooperation with LINTH hospital Uznach and the Bowier Trust Foundation Switzerland we were allowed to donate a fully functional HESS Praktiko 4 treatment table to Liberia.

The Bowier Trust Foundation Switzerland aims to improve and optimize school infrastructures in Liberia. It also gears to create a safe and hygienic environment for needy and vulnerable children so that children have access to adequate education in a intact environment. This creates opportunities to prepare children for an academic and professional career

When are we going to look - when is the world paying attention?

Yemen – Syria – Nigeria – Congo – Libya – Mozambique …. the rising and falling reports and images of tragedies seem to be in a fluid transition with terrorism, instability, natural disasters, corruption and the dark Moloch Internet (fake news, cybercrime) to unite in such a way that hardly borders between real peace and clear war are to be made out. But when are we going to look? When does the world look at it? Yemen right now – water as one of the most important, missing foundations, along with all the other misery to which the children, women and old people in particular are exposed. What are the reasons that the cry for help from Yemen has been heard by the Western world now? Wasn’t it just those pictures of war-injured people, traumatized children, destroyed villages and towns? Live videostreams from crisis areas, right out of the fires of events? THAT – so it seems likely – has to happen until the world pays attention. What a sad chapter. Emerging countries such as Liberia on the West African coast are trying to find its way. The peace reached by the United Nations (UNO) in 2003, after 14 years of civil war is so thin-skinned that little is needed for a new smoldering fire. Corruption and lack of perspectives, desolate infrastructures, lack of water, catastrophic hygienic conditions; difficult or scarce access to primary medical-care; unemployment, crime, fear of new epidemic crises like Ebola in 2014 and much more fuel dissatisfaction and fears of the people living in poverty of well over 4.5 million people. But who cares? A small country like Liberia is on nobody’s radar – it has no mouth-tube, no refugee drama, so we wait for crippling pictures and reports that reach us via television, newspapers and push messages on smart phones, tablets, and we are astonished not hear before from Liberia, or would like to hear. But there are opportunities. Proactive investments in education and structures are worthwhile at a time when this is still possible. After that, it is too late and the international community must provide millions of dollars in emergency aid and mitigation – as it is now in Yemen. The key is education, water and waste management, health, prevention and safety. Investing into children and young people on the one hand (vocational training) and in the training of willing opinionmakers (strategic management) of a social order on the other hand. No – it’s not about millions of European development funds disappearing in the wake of a corrupt African administration. It is about the willingness to pass on KNOWLEDGE, to teach, to guide, to motivate and to take an active part in the paradigm shift from “survival” to “shaping life” with patience. Thanks to the unbureaucratic commitment and willingness of a Swiss engineering and hospital sector; the help of private institutions, and an internationally recognized peace researcher and lecturer from Germany, the Swiss BTFS Foundation in Liberia runs a school and hydraulic engineering program in Liberia to set valuable accents. Liberians will be able to successfully take their fate into their own hands and help the country in its development process (infrastructure, hydro- and waste-management, jobs, staple foods, tourism). 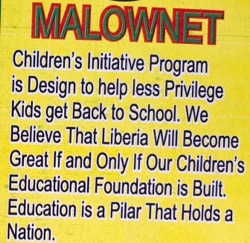 Instead of disposing of IT material, my childhood friend Enzo Enea, CEO of ENEA Landscaping GmbH, Rapperswil-Jona decided in mid-August to give our foundation nine mobile phones, four laptops and eight desktop computers. The phones and two of the laptops have already arrived at our team in Monrovia. At the end of this year, we want to ship the remaining computers to Liberia and set up the first “computer lab” in our Immanuel school. 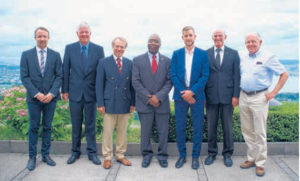 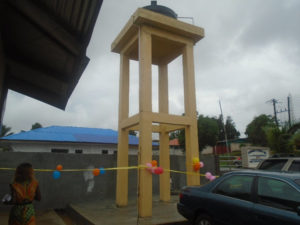 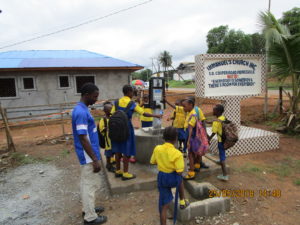 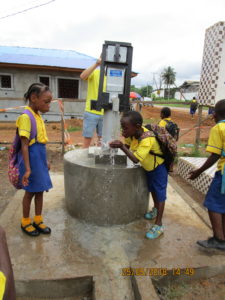 *) Motorcyclists “have a reputation for being criminal and violent. They seek social acceptance as well as the way back into a constitutional society Read more