To overcome the great distrust of the population in Liberia towards the police, since the founding of the foundation, Walz has drawn his attention to effective partnership activities with educational institutions/schools because these represent the state of society. Therefore, the foundation aimed to improve and optimize school infrastructures in Liberia. The foundation intends to create a safe and hygienically acceptable environment for needy and vulnerable children so that children have access to adequate school education. This creates opportunities to prepare children for academic and professional careers.

Following a statement by former US President Barack Obama: "We are the change we have been waiting for," - explains Walz, young people can change history, and education is the way to do this. They are the "change-makers."

The foundation supports or initiates effective measures for the general promotion and support of the local Liberian community in humanitarian and ecological development areas, particularly the support of people-connecting community projects in water supply, hygiene, and health.

The focus is on funding programs in close cooperation between educational institutions in Switzerland and Liberia. It is about education in environmental and solar technology, water supply, agricultural sciences, basic medical care, maternal and infant mortality reduction, sex education, and epidemiology. The following important processes were identified as pioneering:

The foundation organizes and promotes the exchange of students and trainers (train of trainer program) between Liberia and Swiss companies and educational institutions to live this purpose.

Reliable and effective Partner Organisation for Donors and Investors

To inspire and nurture human spirit to create Liberia’s young generation, through education and training, a basis for a successful future in Liberia

SWISSNESS in Quality, Reliability and Trustworthiness

Passion, Devotion and Perseverance to overcome Challenges and to move on

Respect and understand Liberias Culture and its History and Traditions 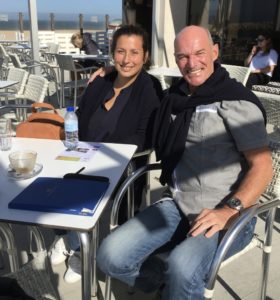 Sara Azevedo, who lives in Nazaré, Portugal, married and mother of a child, works for the small graphic studio DIGITALIMPULSE.PT and is still working in a local mini-market (sara.azevedo@digitalimpulse.pt). In the summer of 2016, a first meeting with her business partner, Ricardo Neves took place, where Sara offered to design a logo for our foundation. What I told her about Liberia, she understood well how to implement it graphically and presented me for little more than 300 euros several options so that a selection could be made. 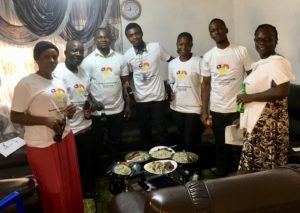 Colorful balloons, sunrise, warmth, palm trees, glamor – and everything firmly anchored on the roof from Switzerland – a roof that is sturdy; provides protection and security. The logo symbolizes the joy of life, fertility and beauty of the country – but also the need to be associated with a reliable, strong partner who gives support in a time of departure and change.

After more than a year I met Sara in Nazaré and handed over our flyers as well as photos of our work in Monrovia.

We are pleased to publish the annual report of this special year with corona.

The Board of Trustees and the experts from the “Ostschweizer Fachhochschule OST Rapperswil” mentioned in the report have approved the release of the annual report. 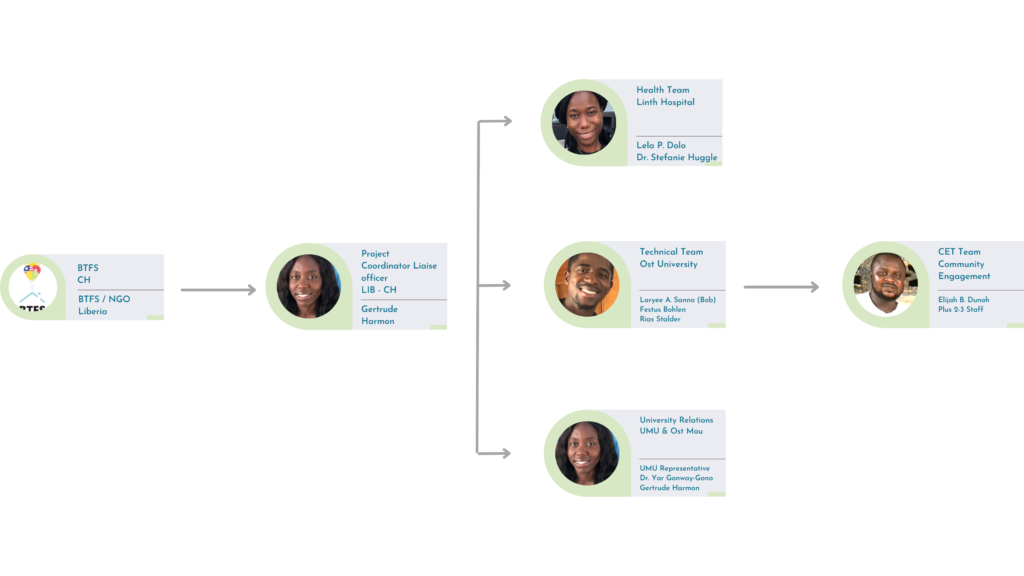 “In the past Liberians suffered from no structures, corruption, bad governance, no plans, no ownership, no strategies. The Bowier Trust Initiative supports the new Liberian Leadership in its endeavours to make a sustainable impact for a more fortunate life for Liberian People!” (Felix Walz)

The many years lasting civil war and the post-conflict time after the United Nations provided full security responsibility and reconciliation in Liberia, it has been a matter of fact, that the family structures were disrupted. Widely devastated infrastructures, lawlessness and incapacitation of governmental and community authorities and structures made it a constant hardship for the poor population, in particularly for children and woman, less fortunate ones, hence they were trying somewhat to survive. International efforts to stabilize and consolidate peace and reconciliation in Liberia became more and more effective and, nowadays, most of the children can regain access to public schools. But the time in between cannot be forgotten, nor ignored. The lack of civilized and functional basic mechanisms sustained throughout and caused an almost complete loss of family structures. No structure, no plans, no self-sustainability, no strategy. One of the negative effects may have been the exposure to violence generally and to sexual abuse in particular. Domestic violence, homelessness, no food, no hygiene, no work, alcohol- and drug addiction prevails throughout. Justice and Police in all sections ought to understand, that there is a direct correlation between Schooling and public safety. If children gets access to education, that means children have a time table, a schedule to provide a daily structure to be followed. If parents understand the importance to support their children and send them to school, children will spend time in schools, come home, eat, play, do some homework, help in household matters, go to bed, because they have to get up in the morning for next school day. If this simple concept is understood well enough by parents and by the society, then one of logical consequences will be, that the likelihood of being unattended on the streets at night times and being exposed to sexual abuse are reduced significantly. This must be addressed and considered on all levels of the Justice pillar, as well as of the Education pillar. Once the importance of a balanced interaction between education and public safety is considered, understood and endorsed by all with a supervisory function, will make a stepping stone to make Liberia a rape-free country and offers its children fruitful perspectives.

Lack of structures, no plans, no sustainability, no strategy; and the negative effects from this were not long in coming: exposure to violence in general and sexual abuse in particular. Domestic and sexual violence, homelessness, no food, no hygiene, no work, alcohol and drug addiction were and still are prevalent facts. Justice and police of all departments must understand that there is a direct link between schooling and public safety.

When children have access to education, it means that children have a schedule; a schedule to follow a daily structure. When parents understand the importance of supporting their children and sending them to school, children spend time in schools, come home, eat, play, do homework, help with household chores, go to bed because they have to get up the next morning for the next school day. In this way, they learn to follow a natural rhythm. If this simple concept is understood well enough by parents and by society, one of the logical consequences will be that the likelihood of being unsupervised and exposed to sexual abuse on the streets at night will be significantly reduced. This needs to be addressed at all levels of the justice/police system, as well as community and school structures. Once the importance of a balanced interaction between education and public safety is understood and shared, this will form the starting point for making Liberia a rape-free country and providing positive prospects for its children.