The Bowier Trust Foundation Switzerland and the Liberia National Police have established a partnership to build and ensure a good relationship between the population and the police personnel.

The population of Liberia living in poverty and the police have not had a trusting relationship over the years. Participants at the major event alleged that some police officers misbehave in the performance of their duties.

The large-scale event, with several hundred participants from Montserrado County, served to introduce to the local community the idea of how the BTFS and the LNP will be jointly active in different counties in Liberia, explaining the importance of police collaboration with the local community in contributing to security and crime reduction. 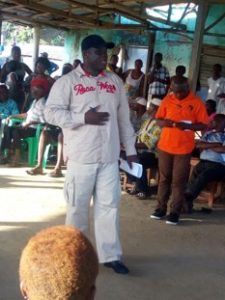 Inspector Sudue said the problem of bribery and misconduct by police officers is against the code of the police and will not be tolerated by his government.

Earlier this week, IGP Sudue spoke in Samukai town in the upper Montserrado district about drunkenness in the workplace, the use of narcotics in the practice of his profession, as well as extortion of money from the pockets of citizens, and police officers abusing their position of power, which his administration would fight against.

"We train our police officers to de-escalate in peaceful dialogue, to communicate properly and, as a matter of principle, not to use force, except when it comes to coercive measures, where all other options do not show the necessary effect.

If there are police officers who harass citizens, abuse them, beg for money, these incidents should be reported immediately so that we can take disciplinary measures.

"If you see a police officer in uniform drinking alcohol or using drugs in the ghettos, report them to us".

"Under the new government in Liberia, we will find the "bad apples" within the police and they have no place in the police anymore. Those who abuse their police uniforms for personal gain; are brutal or drunk will no longer have a job with the LNP" - said Police Director Sudue. He demands that all employees of the LNP behave positively in all respects and at the same time he demands that the population has to respect their police.

In doing so, he also referenced a recent meeting with various community leaders at the Caldwell Community Town Hall where various misconduct by police officers was brought up.

The engagement was initiated through a partnership between the Bowier Trust Foundation Switzerland and the National Police of Liberia to build trust and confidence in the relationship between the police and the population.

During the dialogue, Sudue noted that the LNP faces some challenges due to limited resources to enable it to carry out its mission.

"Right now the government has nothing, they are starting on a bad footing and that is why we are coming to the community to talk about how we can work together to guarantee the safety of our citizens," Inspector Sudue stressed.

The LNP Inspector General further noted that the current strength of his men is insufficient to provide a full security service for Liberia's current population.

He put the total number of LNP personnel in Liberia at about 5,000. A number he believes cannot serve a population of about 4.5 million.

However, the police chief wants citizens to show restraint and understanding until the government is able to strengthen the police force and thus institutional capacity.

Until then, he calls for communities - the people across the country to help the LNP fight crime.

As a first step, LNP's new leadership under Inspector Sudue has begun to initiate a new approach to improving police relations with various communities in Liberia.

As part of strengthening this relationship, the police chief has sought dialogue with community members on issues that affect them and how both parties can work together to reduce crime.

You give us the information we need. If you give us this information, criminals will be arrested and crime will be reduced in your areas." , noted Inspector Sudue.

He cited peace and conflict resolution as hallmarks of his strategy as a means of peaceful cooperation and promotion of security along with the people.

LNP are servants of the country and respect the community 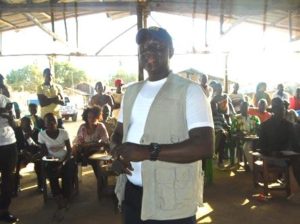 Nelson Freeman, the Deputy Police Inspector Operations, noted that the LNP works for the community and people should not be afraid of the police.

Freeman says complaints from citizens about the misconduct of some police officers are an unfortunate fact, but promises that LNP leadership is working to improve that.

Freeman commented that the LNP leadership was considering monitoring and evaluating its officers in the interest of the security system in Liberia.

Inspector Freeman also noted that it was good for community members to express their disenchantment with the LNP as a way to bridge the gap.

"This communication is useful because problems will not be solved if they cannot be talked about openly. Often we don't know everything that is happening in the communities because there is no suitable interaction with the population."

"We - the police leadership are all members of the community ourselves and we make our police a good police force" - Freeman said.

"Because we love our people and our country, we wear this police uniform and that's why we don't want the public to be afraid of us. We work for you and we will inform you how many police officers have been disciplined for misconduct"

Inspector Freeman at the same time also exhorted the audience to treat the LNP police officers with due respect.

BTFS- as the centerpiece of this LNP initiative. 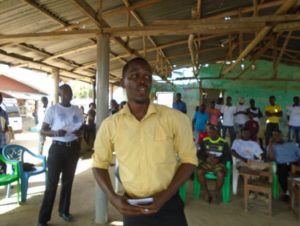 On this occasion, the Bowier Trust Liberia Management Team representative said, Hamson Gayethat the current engagement of the LNP is of central interest for the BTFS Foundation.

implement strategy to build trust between the public and the police.

"It is a good thing to see the police with their chiefs coming to the villagers and explaining to them where the strengths and weaknesses of the LNP are and only working with the communities can help strengthen people's sense of security," Gaye elaborated.

According to him, BTFS is and will remain committed to working with the LNP to promote community safety through high-impact actions and campaigns.

"BTFS is an international NGO from Switzerland based in Liberia that seeks to work with the Liberian National Police on issues of effective community partnerships. This is the foundation for a safe environment and therefore for the successful implementation of actual BTFS key issues such as health, hygiene, sanitation in schools, as well as building the confidence of our young girls and women in the community and working with the police. We are pleased to be here together with our police," Gaye said. 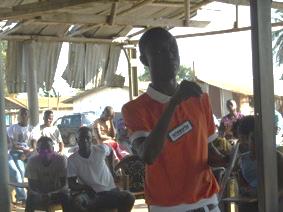 At the same time, some community members expressed their gratitude for the engagement and praised the LNP for the exchange in safety matters that has been provided to the community so far.

The youth chairman of Samukai, Nana Oliver Dangbuah, told the gathering that limited logistics and support for police depots within the Caldwell belt contribute to poor performance by LNP police officers assigned there.

However, Dangbuah wants the police leadership to monitor their police officers in a timely manner and and have their work evaluated.

"The monitoring and evaluation really needs to be done by the police leadership, there are people in the police who have different attitudes and some of them are not working according to their job specifications.

Danguah at the same time called on the LNP to help community members train and supervise police forces in the region.

Ruth Sayndee complained about several abuses for which some police officers in her community were responsible.

She said some of the police officers deployed at the depot in Samukai City did not have good procedures, which deterred them from contacting her about security issues.

"Sometimes when we go case-related to a police depot (post), police officers yell at us and mistreat us. We are responsible people, and when we are treated like this, we do the same. This must not happen again, " said Madam Sayndee.

in close cooperation with police, leaders of the Motorcyclists* and BTFS

On Thursday, February 8, 2018, a workshop was held with about 40 motorcyclists. The workshop was co-led by the local police (Zone8 Base), under the command of C/Supint. Kerkula as well as the Motorcyclist "chiefs", moderated and facilitated by our foundation BTFS. supports .

The motorcylistst and police explained each other and discussed how to:

As a result, it was decided to establish a permanent working group:

The population was informed about the meeting via radio and next Tuesday, February 13, 2018 broadcasts UNMIL Radio a contribution to it. In addition, the newspaper Frontpage Africa published a report about it.

The audio recordings were secured by our Media Advisor Wiliy Tokpah and will be made available for our homepage.

The Motorcyclists are former child soldiers** led by Charles Taylor. He was one of Africa's cruelest rulers, nicknamed the "Butcher of Liberia" - now he has finally been convicted for his crimes. (Source: Bild)

As president of Liberia, he pulled the strings in several bloody civil wars, used child soldiers and got paid in blood diamonds. The UN Special Tribunal for Sierra Leone has convicted the despot... 2012 to 50 years in prison. Taylor appealed - without success. The appeals chamber upheld the sentence of 50 years. (Source South German Newspaper)

Child soldiers are "all persons under the age of 18 who are recruited or used by armed forces or groups (...) including as fighters, cooks, porters, messengers, spies, or for sexual purposes."

Source: Paris Principles of the UN Children's Fund UNICEF. The definition is also advocated by non-governmental organizations (NGOs) such as Child Soldiers International or the German Alliance of Child Soldiers.

International Day against the Use of Child Soldiers 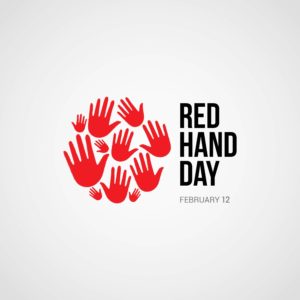 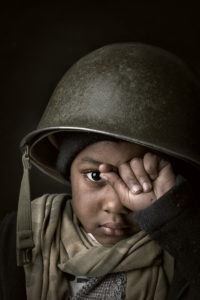 In Liberia, the 14-year civil war is hopefully a thing of the past. After the civil war and the Ebola epidemic, the first democratic presidential elections took place this year.

Yet hundreds of thousands of children and young people around the world are abused to fight as soldiers in wars and armed conflicts. Every year on February 12, the International Day against the Use of Child Soldiers draws attention to their fate. Please read the full report on the Homepage of german Federal Agency for Civic Education.

As an NGO, the Bowier Trust Foundation Switzerland actively promotes the reintegration of former child soldiers into Liberia's society based on the rule of law. Taylor's former soldiers are now between 25 and 35 years old, some of these former child soldiers were forcibly recruited at the age of 9.

FDFA: Swiss Action Plan for the Protection of Children: DFA_strategy_child_soldiers_141007_EN